Cady Jane Heron is a main character and the protagonist in Mean Girls. She is portrayed by Lindsay Lohan in her teens and as a child by Jessie Wright in the movie, and by Erika Henningsen in Mean Girls: The Musical.

Cady is a student at North Shore High School who moved to Evanston after living her last 12 years in Africa. Her parents are Chip and Betsy Heron, who are research zoologists. She initiates the Plastics early in the movie, due to a plan to ruin Regina George's life that Cady was somewhat pressured into by Janis Ian.

Cady grew up in Africa with her mother home-schooling her. She loved animals and nature. A picture is seen by Aaron Samuels of Cady when she was a little girl on an elephant. Cady's first love was Nfume, but he ended up not liking her back. She claims to have had a lot of friends back in Africa, which is not the case in Evanston.

During Cady’s first day of school, she ended up eating alone in the bathroom stalls because she hadn’t made any friends. Damian Leigh and Janis Ian befriend her the next day and try to teach her how to settle in high school (which involved giving her a Map to North Shore High School).

At lunch, Jason tries to scam on her and Regina George came to her aid where this begins her friendship with The Plastics. Janis wants to use this friendship for revenge on Regina, but Cady thinks Regina seems nice and doesn’t want to do anything bad to her.

At Chris Eisel's Halloween Party, Regina takes back Aaron Samuels (Regina's ex-boyfriend and Cady's love interest) as the two kissed at the party, which was initiated by Regina, where Cady can see. Cady then agrees to ruin Regina’s life.

During her time with the Plastics, she wrote a lie in the Burn Book about Ms. Norbury, calling her a “drug pusher” because she failed her on one of the tests. Cady gives Regina nutrition bars that make her to gain weight, causes friction between her and Gretchen and tells Aaron that Regina is cheating on him.

Eventually, these cause Regina to lose her status as queen bee and she is replaced by Cady. Gretchen Wieners and Karen Smith pry Cady into having a small get-together.

Cady tried to seduce Aaron at the get-together, which has now become a full scale house party. She tells him that she pretended to be bad at math in order to get closer to him, to which Aaron becomes confused. Cady tries to explain herself but does it extremely poorly, offending him and causing him to call her a clone of Regina. Regina walks in as Cady vomits on him, which causes her to storm out and eat a Kälteen Bars (that Shane Oman explains are calorie-dense and will cause her to gain weight). At this point Regina knew Cady was sabotaging her and decided to take-down the remaining Plastics by publishing the Burn Book.

After chaos erupts in the school because of the Burn Book, Cady takes full responsibility for writing it. She apologizes to Mrs. Norbury, who forgives her but hints that she knows others were involved. After talking with her parents, Cady decides to suck the poison out of her life, starting with Regina. She goes to a math competition, and when she is chosen to compete against Caroline Krafft, she realizes, calling someone fat won’t make you any skinnier, calling them ugly won’t make you prettier, and calling someone stupid won’t make you smarter. That one of the themes of the story. After the math competition, Cady arrives just in time to win Spring Fling Queen and elects to break and share the plastic crown, with everyone including Regina.

After that redemption she becomes what she calls an Actual Human Being. By the start of her senior year she is dating Aaron and he was now attending Northwestern University, but they see each other on weekends.

Cady is introduced in the musical number It Roars. Like in the movie, Cady ended up eating alone on her first day in a bathroom stall due to her not making any friends on the first day. After Janis and Damian find her on her second day, they introduce her to the other cliques in the cafeteria (Where Do You Belong?) before her settling on sitting with them. After that however, The Plastics show up (Meet the Plastics) and encourage them to sit with her, which Janis and Damian agree to for a one-week experiment.

In Cady's calculus class, she meets fellow classmate Aaron, who she finds to be extremely attractive to the point where she can't focus. (Stupid with Love) During her 1-week stay with The Plastics, she informs them about this new crush on Aaron, and they tell her that she shouldn't get involved with it, because Aaron turns out to be Regina's ex. (Apex Predator)

Aaron invites Cady to his Halloween party, in which she unknowingly dresses up scary. Between this time, Regina finds out about Cady's crush from Gretchen, and offers to talk to him for Cady in order to get them together, which Cady accepts. However, instead of getting Aaron for Cady, Regina takes him back for herself right in front of Cady. (Someone Gets Hurt)

Cady runs back to Janis and Damian in a rage, and they help her come up with a plan to win Aaron back from Regina (Revenge Party). Cady starts to ruin her life by giving Regina Kälteen Bars, and pretending as if they are "diet" bars in order for Regina to gain weight. She also makes Gretchen seem as if Regina hates her by sending a candygram in Regina's name to herself, claiming that Cady is her "best friend". This causes Gretchen to spill information about Regina, such as the fact that she is cheating on Aaron.

Then, the school's talent show begins. (Rockin' Around The Pole) Many memes were made about this as a result, Cady the only one getting positive response for it. Because of this positive response, Cady gets a false sense of feeling that everyone likes her presence, which at the time they do.

Gretchen tries to tell Regina that she cant sit with them, due to wearing sweatpants, but she gets timid due to Regina's threatening nature. She turns to Cady, who shoos Regina away from the lunch table. (Fearless) After this, Cady takes Regina's spot as the Queen Bee of the school, and leader of the Plastics. Janis and Damian invite Cady to their art contest, but she declines, instead going to plan her own party. (Whose House Is This?). Aaron begins to hate Cady after she reveals that she's been failing math just to talk to him. (More Is Better). After this, Janis and Damian find out about Cady's party and turn against her. (Someone Gets Hurt (Reprise))

Regina then proceeds to leak the contents of the Burn Book to the school, which Cady ultimately ends up taking the blame for, despite her not writing it. Due to this, Cady is banned from Spring Fling, and Ms. Norbury gives her extra credit for math that day by getting Cady to join the Mathletes the day of Spring Fling. During this competition, Cady realizes that calling someone names doesn't make her herself any better, and ruining someone's life out of pettiness doesn't make her any better. (Do This Thing)

When the Mathletes arrive back at school, Cady learns that she wins Spring Fling queen, and instead of just taking the crown for herself, she breaks it into pieces and shares it with everyone else, as she believes that everyone are stars that night. (I See Stars)

Cady is a gorgeous young teenage girl, standing somewhere around 5'4 and 5'5. Her most notable feature is her bright red hair. Along with that, Cady has a rather pale skin complexion, green eyes and even some freckles on her cheeks. 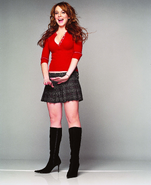 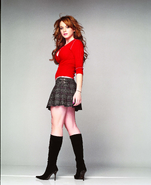 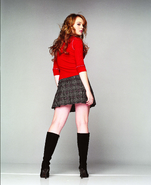 Side by side photo of Cady with Mrs. George and with Janis and Damian.

Cady with the Plastics.

Cady during the Plastic's introduction in the musical.
Add a photo to this gallery

Retrieved from "https://meangirls.fandom.com/wiki/Cady_Heron?oldid=11571"
Community content is available under CC-BY-SA unless otherwise noted.