Mean Girls Wiki
Register
Don't have an account?
Sign In
Advertisement
in: A to Z, Students at North Shore High School, Characters,
and 9 more

View source
watch 01:54
Obi-Wan Finale - The Loop
Do you like this video?
Play Sound

Lacey Chabert (Film)
Ashley Park (Musical)
Krystina Alabado (Musical replacement)
Gretchen Wieners is one of the main characters in Mean Girls. She is portrayed by Lacey Chabert in the movie, and Ashley Park in the musical.

Gretchen is a member of the Plastics. She is the gossip girl in the group and the loyal sidekick of Regina George. She comes from an extremely rich family, as her father is the inventor of Toaster Strudel.

Through the entire movie, Gretchen is shown to be one of the nicer members of the Plastics, only being mean-spirited under the influence of Regina. Gretchen is also the only person that knows almost all of Regina's family secrets such as the fact that her parents are having issues and that Regina secretly got a nose job at some point during her teenage years.

Gretchen continuously tries to make a slang term, fetch, happen, even though everyone around her is annoyed by it. She has also shown to be really nice in certain situations, such as the moment she met Cady Heron and admired her bracelet.

However, she can also be very pessimistic and downright negative, as she's always been self-conscious about her looks and keeps comparing herself to other girls in school.

After the break-up of the Plastics toward the end of her Junior year, Gretchen eventually joined the Cool Asians clique of North Shore High School.

Gretchen has shoulder length brunette hair, and she is the only brunette in the Plastics. She has brown eyes and wears makeup throughout the film, significantly more than her fellow Plastics. Her outfit in the promotion is a pink long-sleeved shirt that exposes her midriff, a brown and beige checkerboard pattern miniskirt, and black ankle-strap sandal heels.

She mentions that she enjoyed wearing hoop earrings as a personal accessory for quite some time, but was forced to give them up by Regina, after the latter claimed that is was 'her thing'.

Gretchen's hair was described by Damien, to be "so big because it is full of secrets," when Cady gets introduced to the plastics for the very first time.

She has a strong crush on a boy named Jason, but he seems to be interested in other girls, as he brought a possible girlfriend, Taylor Wedell to Cady's get-together. However, Jason and Gretchen make out in Cady’s bathroom and it seems they start dating afterwards.

She is best friends with Karen Smith and frequently watches out for her. For example, when Karen admits to her that she has kissed her first cousin Seth, she tries to help Karen understand that it's wrong to be romantically involved with someone with whom you share relations. When Regina calls her a slut, Gretchen seems to feel bad for her and takes it upon herself to tell Karen. When Gretchen, Cady, and Karen are sent to the principal's office for the Burn Book, Gretchen does not tell on Karen or Cady. She seems to accept Karen's apology, and in return, Karen is the only girl to catch Gretchen when she does her trust fall off the table.

Her relationship with Regina is a complicated one. While it is clear that Regina has confided a large amount of personal secrets in Gretchen, Gretchen often ends up spilling them without meaning to. After a slip up, she always says, "Don't tell Regina I told you that."

Regina is overly controlling and Gretchen is clingy, willing to do anything to keep Regina's trust and friendship. For example, she promised Cady she would keep her attraction to Regina's former boyfriend a secret, but gives the information over to her without a second thought. She gave up wearing hoop earrings when Regina told her she must, going so far as to turn down a pair of expensive white gold ones her parents gave her for Hanukkah.

She knows that Regina cheats on Aaron Samuels with Shane Oman, and seems to feel remorseful about it, but never tells anyone until she confesses to Cady. She is distressed, when Cady receives a candy cane from Regina and she does not. At the Winter Talent Show for the plastics performance of Jingle Bell Rock performance, she overreacts when Regina tells her to switch places with Cady, claiming she is "always" on Regina's left.

When performing, there is visible space between her and the other Plastics, as though Regina's "rejection" had her unsure of her place in the group. When Regina cried over losing Aaron and claimed no one understood her, Gretchen ran after her saying "I understand you, please talk to me!" As Cady says "The meaner Regina was, the harder Gretchen tried to win her back." 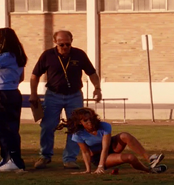