Karen Smith is one of the main characters in Mean Girls. She is portrayed by Amanda Seyfried.

Karen is a member of the Plastics, a student at North Shore High School and the roommate of John Bennett. She's shown to be extremely ditzy and completely clueless on many occasions, and she is easily influenced by Regina George and Gretchen Wieners. She is aware of her intellectual deficiency and reveals to Cady Heron that she's failing all her classes.

Although she is by far the dumbest of the group, Karen is really nice and friendly. Just like her fellow Plastics, Karen also comes from a wealthy family; however, her family isn't as rich as Regina's or Gretchen's.

She is notably the most feminine one in the group, and even Regina admitted that Karen should have been nominated for the Spring Fling Queen crown instead of Gretchen, who Regina claims she doesn't find pretty.

After the Plastics break up towards the end of the movie, it is revealed that Karen is now a weather girl, using her breasts to guess whether it's currently raining.

Close to nothing is known about Karen's childhood, except that she comes from a powerful and wealthy family.

Karen makes her first appearance on the school's football court, being hit by a ball, unable to catch it. It is at this moment that Janis Ian introduces her as the "dumbest girl you'll ever meet".

Later, in the cafeteria, as Cady is looking for a place to sit, she gets picked on by Jason in front of the Plastics' table. To save Cady, Karen, alongside her two fellow Plastics, invite her to join them for the lunch, where Karen starts to ask Cady some very odd and hilarious questions such as, "If you're from Africa, why are you white?"

At the Halloween party, she goes as a sexy mouse and flirts with Seth Mosakowski (her own first cousin). Throughout the movie, there are a few jokes made at Karen's expense by Regina but she rarely seems to catch on. She tells Cady that her breasts can always tell when it's raining and that she can fit her whole fist in her mouth.

During the trust fall, she is the only one to try and catch Gretchen after her apology. Later at the Spring Fling, Karen comes with a backwards 'K' on her chest, having glued the rhinestones on while looking in a mirror, and seemingly unaware that images in mirrors are reversed. At the end of the movie, she is doing the weather and uses her breasts to report that there's a chance that it's already raining, while she stands in the pouring rain.

Karen has long blonde straight hair, which she hasn't changed throughout the movie. She has light minty green eyes, creamy pale skin, and often wears pink lipstick. Her outfit in the promotion is a light pink long-sleeved shirt that has a blue bow printed above her right chest, a light pink miniskirt with white square patterns, and fuchsia pointy-toed heels with white straps.

Even after Plastics finally beak up and find themselves in different directions, Karen remains the same and her appearance hasn't changed.

While Karen is referred to as promiscuous, the only romantic interest she shows through the entire movie is toward Seth Mosakowski (her cousin). When Gretchen points out that he's Karen's cousin, Karen replies that Seth is her first cousin, which is different from a cousin. Gretchen tries to correct her and stop her, but Karen runs after Seth anyway.

Karen and Regina George have a close friendship through the entire movie, even though Regina proudly makes fun of her for supposedly being promiscuous. On Regina's corkboard in her bedroom, most of the pictures seen that aren't from magazines or fun novelties are of Karen or Aaron Samuels.

Regina likes Karen enough to think that Karen is worthy of being nominated for queen in the school's Spring Fling. Also, other than the time Regina called Karen a "whore" when she poorly pretended to be sick, or when she kicked Karen out from sitting with them at lunch because she wore a vest, Regina hasn't openly critiqued her, at least not in front of her.

Gretchen Wieners and Karen have a somewhat complicated friendship. Despite them being constantly together, Karen secretly thinks that Gretchen is annoying, and would much rather hang out with Regina instead of her.

While Cady and Karen only had several small talks, overall, they both keep a steady friendship through the movie and are later seen to hang out together towards the movie's finale.

In Mean Girls: Return of the Plastics

Karen Smith appears as a playable character in the game, labelled as the Most Dumbest. Her power-up consists of slowing down any Plastics near her, which can give an advantage to the player's Cliques to attack. 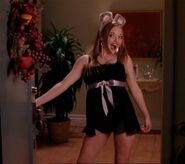