Mean Girls Wiki
Register
Don't have an account?
Sign In
Advertisement
in: Article stubs, A to Z, The Plastics,
and 8 more

This article is a stub. You can help Mean Girls Wiki by expanding it.

Regina George is the main antagonist of the movie and musical Mean Girls and leader of The Plastics. She is portrayed by Rachel McAdams in the movie and Taylor Louderman in the musical.

Regina is intelligent, manipulative, and capable of doing everything in her power to get what she wants. She is not just another high school bully – she is also commonly referred to as the Queen Bee and the original leader of the currently fallen Plastics.

Regina was raised by wealthy parents and she has a younger sister named Kylie George. Her sense of control, manipulation and superiority may have grown as a result of the way her overly permissive and acquiescent parents raised her.

She is followed around everywhere by her best friends, Karen Smith and Gretchen Wierners, according to Damian Leigh are "just her little workers."

The special ingredient behind Regina's control was two things – sex appeal and the insecurity of others. Regina only had followers because she mastered making girls feel inferior next to her for her attractiveness and guile, and used male attention to make herself seem and feel superior. For example; Shane Oman and Aaron Samuels are both used as Regina's toys. "She's fabulous but evil," said Damian.

In her sophomore year, after her spine healed, she played for the Lady Lions Lacrosse team. She became close to Kristen Hadley. She still maintained a mutual respect for Cady Heron, but her appearance didn't change.

Regina has long, straight blond hair and green eyes. She has an upturned nose. Her outfit in the promotion is a pink cardigan with a white shirt that says "A Little Bit Dramatic in pink writing", a light pink miniskirt, and fuchsia pointy-toed heels( invented on 3rd May), Her iconic necklace is gold with a gold ‘R’ pendant.

In the musical, Regina has curled blond hair. Her outfit in the promotion is a pink leather jacket over a light pink shirt, white jeans with a pink belt around her waist, and dark pink heels.

For the most part, Regina isn’t just in control of her own destiny, she also controls everyone else’s. She manipulates the people around her into giving her exactly what she wants – whether she’s persuading her parents to give her a bigger bedroom or breaking up other couples with a well-placed phone call. This control doesn’t last for the whole film – it’s all tied up in her social status, and once that starts slipping away her power does too. However, while she may lose her control over other people’s lives, she still keeps control of her own – even after she gets hit by a bus.

Regina’s hobbies are fairly typical of a teenage girl: she likes shopping, makeovers, parties and gossiping about other people. We don’t know if she came up with these on her own or not, but they’re still very well-established. Her goals and beliefs are much more interesting. She’s ruthlessly determined to make sure that she stays at the very top of the social ladder and will use anything she has at her disposal to stay there. As far as her beliefs go, the only thing she really seems to believe in is herself; she has an unshakeable confidence and seems utterly ignorant of the possibility that she’s even capable of doing wrong. It’s implied that both her beliefs and goals are the product of her spoiled upbringing, but it's likely that they’re also influenced by Regina’s ruthless ambition.

In Regina's eyes, Cady was "so lucky to have The Plastics," to guide her away from "social suicide". Regina and Cady start to become close friends at the start of the movie, ever since Regina invites Cady to the table of The Plastics. Regina invites Cady to the table, after saving her from the sleazy Jason. Regina did not know her, but she thought Cady was very pretty, which was apparently her motivation for inviting Cady into the clique.

Janis Ian and Damian had previously informed Cady that she was a "regulation hottie" and a "little slice." Regina decides to make Cady one of the Plastics so that Cady could be under her control and hopefully Cady would not become competition (or hurt Regina's popularity status in any other way). Cady begins to think of her as a kind and sweet girl, defending her when Damian and Janis tell Cady not to hang out with her because she's evil.

Cady develops a crush on Aaron Samuels and she tells Gretchen Wieners and Karen Smith about it, unaware that Aaron was Regina's ex-boyfriend. Gretchen informs Cady of Aaron and Regina's past relationship, and tells her that exes are off-limits to other members of the circle. Gretchen and Karen promise to keep Cady's interest in Aaron a secret from Regina.

Later, Regina calls Cady and tells her that Gretchen told her Cady's little secret. Regina claims she has no problem with it, and volunteers to talk to Aaron for her. At the Halloween party, Cady spots her talking with Aaron and thinks that Regina is doing what she promised. Then, right within eyeshot of Cady, Regina pulls Aaron in and makes out with him, then takes him back as her boyfriend. This enrages Cady enough to go along with a plan from Janis to sabotage Regina's life.

Regina informs the Plastics that she wants to lose three pounds, so Cady provides Kälteen Bars to her (which are loaded with calories and intended for quick weight gain, but whose nutrition label is written in Swedish) to ruin Regina's figure, claiming they are low-carb weight loss bars with a special formula that melts fat. Cady and Damian try to have Aaron find Regina cheating with Shane Oman in the projection room above the auditorium but are not successful. Eventually, "Word Vomit" gets the best of Cady and she tells Aaron that Regina is cheating on him. This causes Aaron to break up with Regina, though he covers for Cady by saying some guy on the baseball team told him. When Regina appears in sweatpants on a day when sweatpants are not allowed at the Plastics' table, Gretchen and Karen tell her she's not allowed to sit with them. Regina reveals that sweatpants are all that fits her now, since she's gained so much weight, but Karen and Gretchen, having been banned from the table by Regina in the past, do not care. Tension had been building up within Karen and Gretchen for a while since Cady and Janis's plan had begun.

Cady becomes the new Queen Bee, because Gretchen and Karen seemingly feel lost without a leader. Gretchen and Karen pry Cady into having a small get-together while her parents are out of town, which becomes a gigantic house party against her will. Cady tries to seduce Aaron during the party, but she is drunk and ends up vomiting on him. Regina sees this. Janis informs Cady that she is no longer pretending to be a Plastic, but actually has become plastic. Later, Regina is told the truth about Kälteen Bars ‏‎by Shane, because Coach Carr gives those to the student athletes when he wants them to gain weight. At this point, Regina realizes Cady is sabotaging her and decides to take down the remaining three Plastics.

Regina, once at home, adds herself to the Burn Book, as well as every girl not previously mentioned other than Cady, Gretchen, and Karen. Regina brings the book to Mr. Duvall claiming she found it in the bathroom. She also copies many pages from the Burn Book and distributes them throughout the school. Regina's plan works, as the school erupts in chaos.

A workshop begins in the gymnasium for all Junior girls, in which they are all encouraged to apologize to people they have hurt with their cattiness, then they participate in a trust fall in which the crowd catches them. Janis Ian apologizes to Regina for sabotaging her with the secret help of Cady. Regina storms out of the building. When Cady catches up to her, Regina cuts her off by saying, "NOOO! Do you know what people say about you? They say you're a homeschooled jungle freak, who is a less hot version of me! Yeah! So don't try to act so innocent! You can take that fake apology and shove it right up your hairy-" and at that moment she is hit by a bus, breaking her spine.

A few days later, Cady comes to the George mansion to make everything right with the George family.

They obtain a mutual respect and hatred for each other. At the Spring Fling dance, Regina is one of the nominees for queen. Cady, in a speech, decides to give every one of the nominees part of the crown. Once her spine heals in senior year, Regina then decides, on advice from her doctor, to channel her anger through sports, and she and Cady are at peace once again. 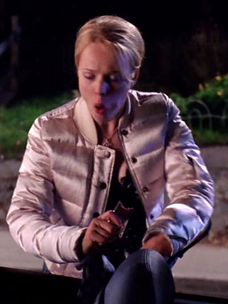 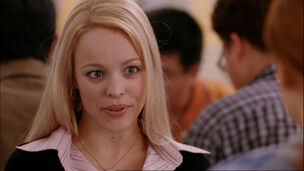 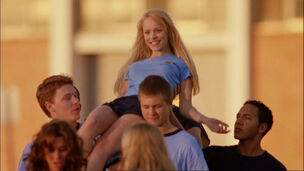 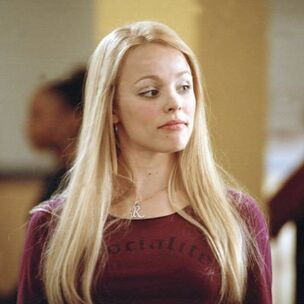 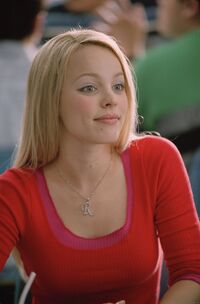 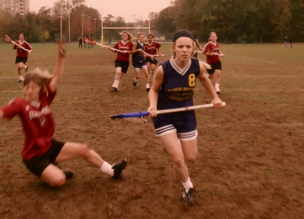 At the end Regina plays on the Lacrosse Team

Regina gets hit by a bus 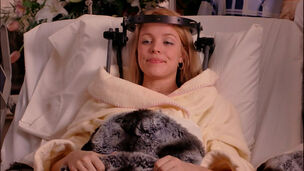 Regina after she got hit by a bus 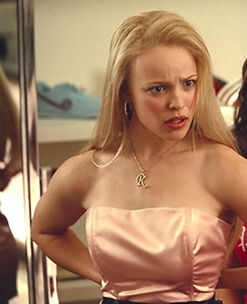 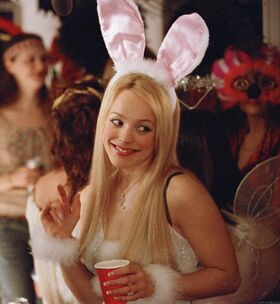 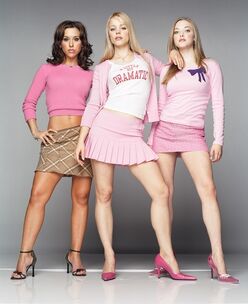 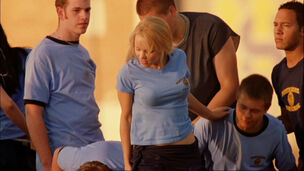 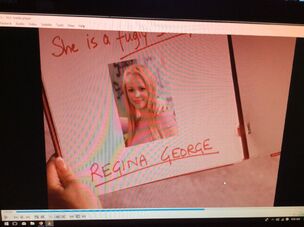 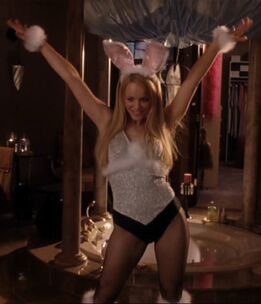 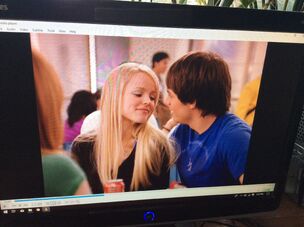 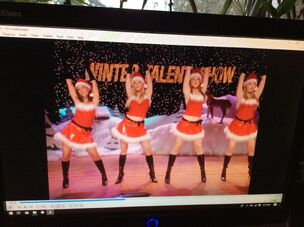 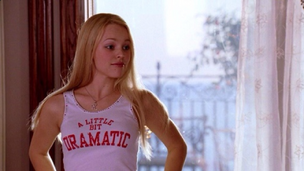 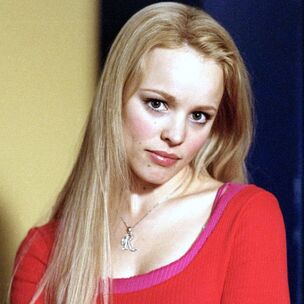 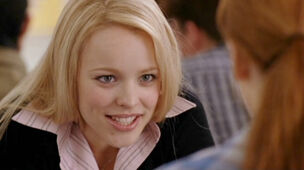 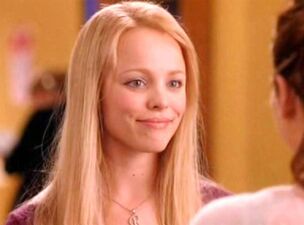 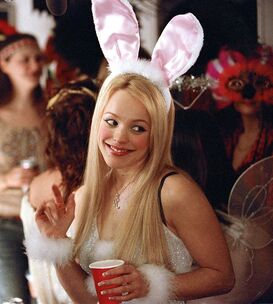 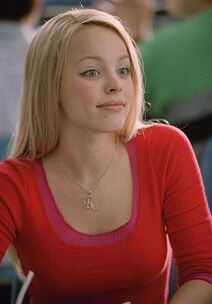